Over the weekend the whole Rients clan visited Six Flags amusement park in Gurnee, Illinois. I managed to get to a couple of games stores while up north. A brief foray to the Gurnee Mills mall lead to the discovery of Board Games Barrister. They had a respectable selection of boardgames and a few shelves of Wizards products. One guy at the store tried to give me the hard sell on the new WotC Basic box. I would have bought a copy for my nephew, but the little dude told me he wasn't interested. I found it interesting the Board Game Barrister also stocked the Dragon Age boxed set.

I had an interesting exchange with the clerk who tried to sell me the boxed set. He asked me what, if anything, I currently played. I said I mostly played Labyrinth Lord right now. He had never heard of it. When I explained that it was an emulator of '81 Basic/Expert he said "Oh, you mean like Pathfinder but for an older edition?"

The next day my wife, my sister-in-law and I journeyed to nearby Grayslake, IL in search of a used book store I had googled up. We showed up the one day of the week the shop is closed. But just down the street we found Unique Gifts and Games. This was a nice little nerd shop with a friendly staff. Though the open gaming area had a few tables spaced way too close together. It looked like it would be hella cramped on nights when every table was in use. The oddest part about Unique Gifts & Games was that the stock was 75% standard game shop and 25% New Age magical/occult stuff. I know there's a certain overlap between customers of both types of store, but I had never seen a combo affair before where you could buy both a book of D&D spells and an actual witchity spell components.

I was greatly disappointed that there was no used section, unless you count the D&D shelves: 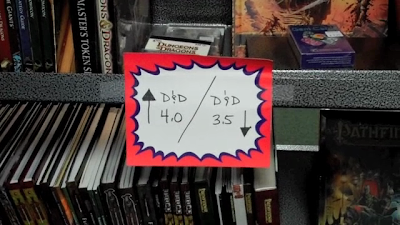 If I remember correctly the joint had three shelves of 4e above that sign and 2 shelves of 3.5 below it.