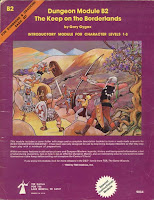 I recently mentioned on that RPG Circus podcast that the Keep on the Borderlands is my all-time favorite module.  I have plenty of modules new and old that I adore, but the combination of heavy nostalgia plus the brilliant pick-your-poison layout of the Caves of Chaos makes it the top dog in my book.  I wish more dungeon maps took cues from the Caves of Chaos.

However, I think that ol' B2 and many other starter modules contain at least two grievous oversights:
Speaking of dwarves, a starter module could be improved by including one or more spots where dwarven search abilities are useful.  And maybe throw in some sort of runic clue that can only be deciphered with a read magic spell, so as to give the MU something to do besides casting sleep.