The majority of my D&D outings have been set in the World of Greyhawk, with the Known World/Mystara a distant second. I've long favored the Wild Coast and the Bandit Kingdoms as regions of Greyhawk ripe for adventure. I dig the petty feudings of minor lordlings in the shadow of greater powers. I'm pretty sure the genesis of the campaign started when I first found this map on the internet back in the mid-90's: 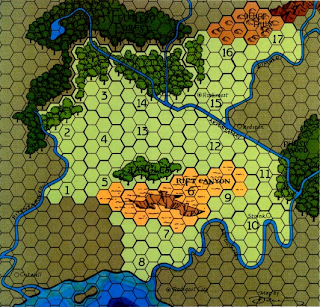 If I remember correctly this map was originally published in Dragon #63.  Here's a key point in the evolution of my campaign: I found the map but not the article that accompanied it.  I wouldn't own the latter for several more years when my wife got me the Dragon Archive CD-ROM set for Christmas.  You know what's better than getting the Dragon Archive CD-ROMs for Christmas?  A wife who'll get them for you.

Anyway, so I had this great map of the Bandit Kingdoms with the individual fiefdoms marked out but no key.  I had a lot of fun populating that map.  Area 7 or 8 (I forget which at the moment) was the focus of much of campaign as it contained the starting town of Blighton and the randomly generated megadungeon I unimaginatively title The Dungeon of Doom.  I've never been big on fussing over titles and names, but I guess the fact that you're reading Jeff's Gameblog probably makes that clear.

I decided that the Bandit Kingdoms needed a little backstory.  In my version of the World of Greyhawk the area these punk-lords occupy was once known as the Hammer Lands, sort of a sister state to the Shield Lands with a similar chivalric ethos.  But the Hammer Lands suffered from a succession crisis when the king died without naming an heir and his three sons tore the land apart in a multi-generational civil war.  The bums running the 17 areas on the map above are mostly descendants of opportunistic adventurers who grabbed some land in the aftermath, but two or three of the Bandit Kings had totally legit claims to rulership of the whole region.  One plotline the PCs never followed up on was a search for the Crown Jewels of the Hammerlands.  I thought they might go for an opportunity to play kingmaker in the region, but they seemed to prefer the lawless status quo.  Which was fine by me.

One of the major themes of the campaign was the Lesser of Two Evils.  Most characters in the campaign tended towards the bottom right corner of the chart (i.e. Neutral, Chaotic Neutral, Neutral Evil, Chaotic Evil).  Key PCs in the game included a CN bard/mage with a penchant for fireballs and necromancy, a CE half-drow cavalier who commanded a small mercenary army, a CE Demogorgon-worshipping half-orc cleric-assassin (played by yours truly during the odd occasions when someone else DMed) and a CE cleric who claimed to serve the octopus-god Pyaray but was actually a double agent for Tharizdun.  The nicest PCs in the campaign were the half-elf who wanted to form a gnome army to destroy the human menace and the druid who accidentally burned down his own forest.

But compared to the Horned Society these miscreants were the good guys.  The Horned Society was always half a step away from invading the Kingdoms, one of the few things that could temporarily unite the petty kings.  My version of the Horned Society was sort of a cross between Hollywood Nazis and the Deviants of Marvel comics: their version of concentration camps didn't just churn out corpses, they also created horrible mutants to be unleashed against their foes.  One time the party stumbled across a hidden outpost of the Horned Society deep inside their own territory.  I thought they might clear the joint out and occupy it themselves.  No.  They leveled the place.

A couple of sessions were devoted to exploring Rift Canyon.  My version featured a lost world jungle full of dinosaurs and cavemen at the bottom.  The canyon wall wasn't a steep drop-off to the bottom, but rather a series of steps down, with each step a few hundred feet down and a fraction of a mile wide.  Along one of these steps the party discovered a silver vein in the side of the canyon.  They set up a wood stockade on that level and arranged for the silver to be mined out.

That's all about the campaign that pops into my head at the moment.  Feel free to ask some follow-up questions in the comments.  And maybe my buddy Pat will offer some additional thoughts as well.  He was the only player to attend every session of the campaign and his memory is a lot better than mine.