The Deconstruction of the Techno

The "Techno" is one of my favorite character classes from David Hargrave's Arduin materials. I'll let Dave explain the deal in his own words:

Techno's are specialists that disbelieve 100% in magic, and work from a strictly scientific point of view. They can "figure out" nearly any mechanical or technological item, given enough time and resources. They are constantly dismembering dragons to see where the flame thrower was hidden! Or getting eaten! They dislike intensely all forms of mages but tend to grudging tolerate clerics. They never wear armor unless it's something like a flack jacket. They also never carry anything except technological weapons to fight with. They think warriors are "a bunch of neanderthals".

It's a crazy fun concept. The mechanical execution involves lots of special abilities, many of which are percentage dice based but some are delightfully bare of hard rules. For example, a 15th level Techno gains the ability to construct things like flintlocks, clocks and deadbolts but no rules for how that happens are presented. I like that open-ended approach. Also, 100th level Technos can build spacecraft. What's not to love? You know, other than the fact that the concept of 100th level characters gives me hives.

The second volume of the Arduin books, The Runes of Doom, offered this great illo of a techno encountering a valpyr in a half-medieval, half-sci-fi dungeon. Dig it: 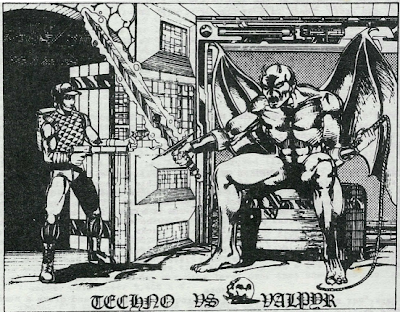 I'm pretty sure a valpyr is a vampire/balrog. That's just how Hargrave does things. His work is a beautiful combination of mad ingenuity, groan-inducing recombination and shameless appropriation.

Anyway, the one thing I don't like about the Techno is all the fiddly percentage abilities. I'd rather have a cleaner, simpler design that could be dropped into an OD&D game with less fuss. Enter Ken St. Andre, of Tunnels & Trolls fame. 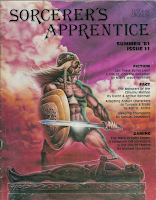 Back in the day Sorcerer's Apprentice was kind of like Dragon for the T&T set. Most of the articles were for T&T, but there was plenty of other stuff. For example, issue 11 contains a short story by Manly Wade Wellman, a nifty statless article on the Cthulhu Mythos, and a great look into the history of mythological Sleeping Champions. But I want to talk the article "Adapting Arduin Characters to Tunnels & Trolls", written by St. Andre with help from Hargrave and Liz Danforth.

The title is slightly misleading. The article isn't so much about how to convert your Arduin PC to T&T stats. Instead, St. Andre gives a T&T build for each of 8 Arduin classes. I'm talking about this article because the Technos is one of the classes St. Andre tackles. And he does a great job of it.

Tunnels & Trolls, if you will recall, was written as a response to OD&D. St. Andre liked the basic concept of fantasy adventuring in stinky underground mazes, but felt that the mechanics were questionable. So he made his own mechanics that were slimmer and a lot less complicated. That's exactly what he does to the Techno class in this article. All the Techno percentage abilities are boiled down to one simple d6 chart.


That's more like it! I could graft that simple chart onto a standard Fighting Man. Then remove the ability to use magic and standard arms and armor. The result is a very clean Techno class.

The other thing I like about St. Andre's Techno is that he acknowledges the inherent contradiction in a 'scientific' class that eschews magic. Any decent scientist transported to a stock D&D setting would find plenty of reasons to believe in magic. They wouldn't declare magic a bunch of balderdash, they would study and use it!

So as written the personality of the typical Techno is completely irrational, and that's kinda what makes the class so fun. St. Andre includes the rule "Technos only get one try to figure out an item--if they don't get it right, they'll come up with some bizarre use for or explanation of the technological item which they believe to be correct. This is a fine opportunity for the GM to have some fun with the players." Approached that way, the Techno would make a great class for a post-apocalyptic D&D game of the Thundarr school. In such a milieu the Techno represents someone who reveres technology, even though it clearly failed to save mankind from its present fate.

I'll just end this post with a throwaway line from St. Andre:

Every once in a while I get to feeling crazy, and I throw my dungeon open to a bunch of Traveller characters. Plasma guns against dragons makes for an amusing confrontation. So far the spacemen haven't won yet.