These mechanics are based on Emmet F. Milestone's "Kirk on Karit 2" for Star Trek: Adventure Gaming in the Final Frontier, originally published in Different Worlds #4.  You can read the original rules here.

When characters of appropriate gender and orientation encounter each other for the first time a Romance Roll must be made for each of them. Romance Rolls are made in accordance with the following procedure:

1. Romance Rolls are made in order of the character's Charisma scores, with the most Charismatic character rolling first. In the event of a tie, Wisdom is used as a tie breaker, but with the less wise character going first.

2. A potential beloved is identified. Generally this will be another character present of appropriate gender and age. Characters with higher Charisma scores will be favored. The player of the character identified then rolls 4d6, which is adjusted by their Wisdom modifier. If the sum obtained is less than the Charisma of the potential beloved, the character identified in step 1 is smitten, i.e. you are trying to roll high to save versus emotional complication.

3.  Whether a  Romance Roll results in physical lust, tender affection, dumbass puppy love, Princess Bride-style True Love, etc. is up to the player, as is what their PC will do about it. 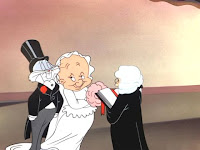 4. The DM may modify or disallow Romance Rolls based upon the species of either party. Halflings and humans might fall only in love with a 5d6 roll, for instance. And then there’s that whole mess about dwarven women and beards...

5. A character will not fall in love with more than one character during the course of a single session.

6. Once any character has already fallen in love, the DM rolls 1d6. A result of 3+ indicates that no more characters will fall in love during the scenario, except as the result of a successful wooing. Wooing uses the normal NPC reaction charts, modified by myriad factors including such things as social class, needing a bath, gifts offered, etc.

These rules are obviously incomplete.  Their main function is to get PCs into trouble, and I believe they may be sufficient to get that ball rolling.