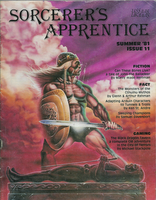 I've mentioned Sorcerer's Apprentice magazine once before, in connection with the T&T adaptation of Dave "I created Arduin so I'm awesome" Hargrave's Techno class. As I said in that post, SA was basically the same concept as the Dragon but aimed at T&T fandom. I only own this one issue, but I wanted to share another item from it. Many of you probably recall "Sage Advice", Dragon's long-running Q&A column with official rulings on write-in rules queries. (Paging Jamie Mal! Paging Jamie Mal! Long post needed explaining how Sage Advice contributed to the destruction of the hobby and the corruption of our youth!)

Sorcerer's Apprentice had it's own Q&A column called "Queries & Quandries" Folks familiar with the more laid-back vibe of T&T won't be surprised that the column didn't take itself super-seriously. "Q&Q" (notice the lack of "A" in there!) opened with this preamble:

A forum for questions and answers about T&T, about the solo adventures, and about anything else in FRP you readers can come up for us to answer (if we can)! One of the most basic philosophies of T&T is to adjust the game as you see fit to suit your own style of play -- so don't misuse the answers given here. If our point of view seems reasonable, feel free to use it, but do not feel compelled to do so. --Mike Stackpole

Since Mr. Stackpole (author of the Pulling Report and lots of other stuff) signs the intro and no one else is credited for the body of the text, I assume he wrote the answers here as well. Most of the questions are straightforward affairs: an inquiry about using torches in combat, a clarification of the spell Catseye and whether it works in total darkness, a question about a special situation in a solo adventure, etc. I particularly like the answer to the torch question, where Stackpole gives the damage for whacking someone with an unlit torch, then calls on the referee to adjudicate adds based on the flammability of the monster being fought.

How would I figure the modifiers for a half-breed's prime requisite?
Half-breed's tend to be rare. Chances are that most half-breeds will be the offspring of dungeon-delving or adventuring characters. In addition, only logical creatures could breed together (fairies and giants don't cut it.)

To create a half-breed, roll 3d6.
--If you don't roll triples, the child is not a noticeable half-breed. Roll one more die: if it comes up even, the child will resemble its mother; odd and it will resemble the father.
--If you roll triples (other than three 6's), the child is a half-breed. To determine its attributes, average the modifiers of the parents.
--If you have rolled an 18 on three dice, you have a super breed. This child has the greatest attribute modifier of its parents per attribute. (A dwarf's CON modifier of x2 will take effect, rather than the elf's CON modifier of x 2/3.) These superbreeds are usually sterile.

One other note should be made. If dear olf Dad or Mom has received some tremendous magical gift (like the ability to shapeshift), this is not passed on to children. Only vampirism or lycanthropy are hereditary traits, although a family curse will also follow bloodlines. Of course, all children are first level characters and must be rolled up as such.

I love this system! But I'm a sucker for rolling extra dice at chargen, especially when it gives me a slight chance of being some sort of super-mutant half-dwarf half-elf. But shouldn't triple ones on the dice mean you're a loathsome reject with the worst modifiers of both races?

One other neat thing for SA #11. This ad is opposite the "Queries & Quandries" column: 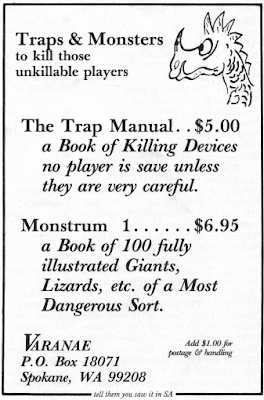 Let's kill some unkillable players! I can't tell you which phrase I like more "no player is save" or "etc. of a Most Dangerous Sort".