This here post is a reply to "Weapon vs. AC" over at Grognardia. I wanted to show some charts I wanted to talk about, so I'm posting here rather than commenting there. First, let's take a look at the Man-to-Man melee chart from Chainmail:

This chart predates the concept of characters having levels or stats, so the only variables that determine the chance of killing a man is what weapon you've got and what armor the other dude is wearing. I really like this chart. You roll 2d6 and if you get high enough your foe is dead meat. Also, you have good reason to carry multiple weapons, even though they all do the same damage. Sometime I kick around the idea of using this chart with OD&D, at least when fighting man-like foes capable of wearing armor and wielding weapons.

Now let's look at a rather infamous chart from AD&D, the weapons vs. AC chart on page 38 of the first edition Players Handbook. Dig it: 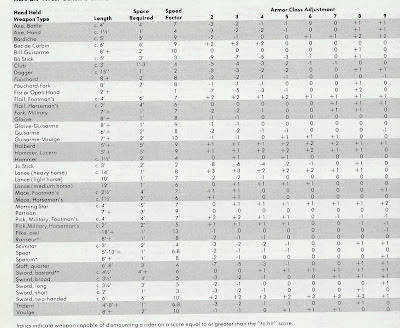 As much as I like the original weapon versus armor mechanic in Chainmail, I'm pretty much convinced that this chart blows goats. And the reason why is that somewhere along the way the armor system was tweaked without anyone noting the implications for this chart. In a world where each AC corresponded to exactly one type of armor, this chart could be made to work. But AD&D isn't such a world. Most of those single digit numbers in bold at the top of the chart represent more than one kind of armor. AC 7 (or more correctly, Armor Type 7) is the stand-in for no less than four different kinds of armor: leather & shield, padded & shield, studded leather, and ring mail. Similarly, Armor Type 4 is chainmail & shield or splint mail or banded mail.

Maybe I can buy that leather and padded work the exact same way for purposes of weapon vs. AC. Ditto studded leather and ringmail. Most days I can't even remember the crazy differences between splint and banded, other than banded gets you three more inches of movement. Heck, I'm not even sure if either of those two armors ever actually existed. It's when shields get added to the mix that my sense of versimilitude goes out the window. I just can't see how, in terms of armor penetration, a suit of leather plus a shield always automatically equals a suit of ringmail. It just doesn't add up in my head.

And why the heck aren't wooden and metal shields treated differently? If I made a suit of platemail out of wood, would you expect it to block weapons the exact same way steel plate does?

I don't mind things not making sense in my games. In fact I tend to encourage it. However, if we're going to go to the trouble to get down-and-dirty with this level of combat detail, then I expect it to hold together logically. I'd much rather ditch weapon versus AC entirely or go with something more hardcore (like Arms Law's doom-laden charts). The PHB version dwells in a wishy-washy middle ground where it only makes half-ass sense to me. I guess cutting the number of armor types down would also be a way of making the PHB system work. Not too many players give a crap about anything other than leather and plate anyway.