So today I tried something new: running a demo game at the friendly local game store. The store is Armored Gopher Games, which I still think of as the new game store in town despite being like 2 years old. Of course sometimes I still think of 2nd edition AD&D as one of the new editions of D&D, so I'm just weird that way sometimes. Armored Gopher keeps a pretty decent website with an online schedule of events, which they were happy to add me to the schedule. One of the owners, Dave, even put a news item about my demo on the front page. Thanks, dude! 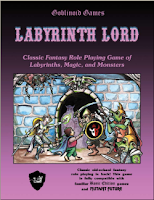 The system I demo'ed was Labyrinth Lord, the Goblinoid Games retro-clone of Basic/Expert D&D. Three of my four players understood immediately what was going on when it was explained to them that elf is a class. The fourth was a teenager so he had no idea what us fogies were getting on about. But he ended up with a fighter and he knew to stab the goblins with his spear, so he got on just fine. The party ended up consisting of fighter Fraznak the Mighty (played by Tom), cleric Brother Thod (played by Squirrel*), elf Herbwinn (Tim), and magic-user Bartholomew O' The Beard (some other dude named Jeff). Herbwinn's Wisdom was only 4 and the player used that as an excuse to get into shenanigans. I love instigators like that. Bartholomew had a 4 Dex, which I explained as the effect of his ginormous beard constantly getting in the way.

I pitched to the group two different scenarios: search a dungeon for a dead dragon's treasure or rescue friends and family kidnapped by goblins. The party opted for the latter scenario and I was impressed by the amount of mission discipline they demonstrated. They grabbed handy loot, but if a line of investigation wasn't leading them closer to completing the rescue mission they moved on. We only had two hours for the demo and they were able to retrieve two of the prisoners in that period, thanks to keeping on task. 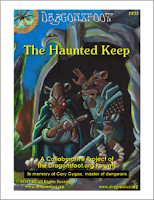 Taking the "burgle the dead dragon's lair" scenario would have put the party into my adventure Under Xylarthen's Tower, which I would have been glad to run again. But the option they chose allowed me to run something I've been wanting to try for a long time, DF23 The Haunted Keep. Some of the cool people at Dragonsfoot got together and completed the sample dungeon outlined in the back of Moldvay's Basic rules and the result was The Haunted Keep. I really like the results. Funnily enough in the time allotted the party stayed entirely within the area originally detailed back in 1981.

So for an hour and a half or so we just played a game, no big whup. Spiders and goblins were slain, treasure was found, green slime was narrowly avoided, and laughs were had. Tim, who plays 4e and Shadowrun and Savage Worlds and lots of other things, said something to the effect that he had forgot what is was like not to worry about how the character was constructed and instead to focus on just playing the game. The other dude named Jeff totally made my day with something along the lines of "I thought I was going to have a boring morning. Thanks for making me wrong." Puts a smile on my face just thinking about that.

I'm actually running a couple of other demos this week. Wednesday night starting at 7pm I'll be doing some OD&D and next Saturday morning I'll be finally running some Castles & Crusades. So if you're in the area stop by and we'll have some fun.

*I don't know why he's called Squirrel and I'm kinda afraid to ask. Nice guy, though.