Friday's post about Gygax's suggested ways to break an artifact drew some good comments, including some great chitchat about the "triple iron golem", Talos. Jamie Mal reminds us that the bronze Talos of Greek myth appeared in the 1963 adventure film Jason and the Argonauts. 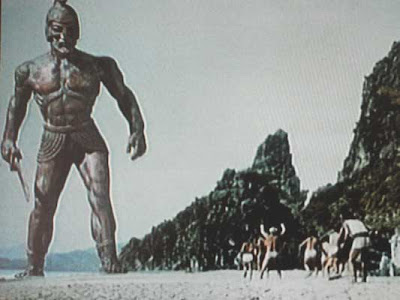 Take away the sweet beard on that dude and you end up with someone who looks a heckuva lot like the Sutherland illo of the iron golem from the 1st edition Monster Manual. 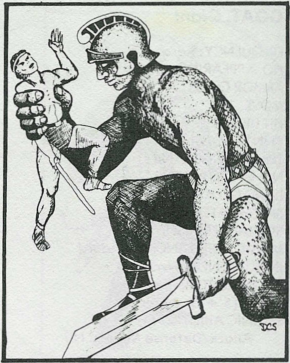 Note the radical difference in size between Talos and the canonical iron golem. I think Gygax's version of Talos made an uncredited appearance in the old D&D cartoon, as in one episode the kids tackle a MUCH bigger animated iron statue that otherwise resembles the Sutherland illo. Hank the Ranger fires energy bolts from his magical bow that wrap around the statue's ankles. It trips and when it hits the ground the dude falls apart into a bunch of hallow pieces. I'm pretty sure Hank's bow shoots the same shiny yellow plot-energy that Black Vulcan of the Superfriends uses. 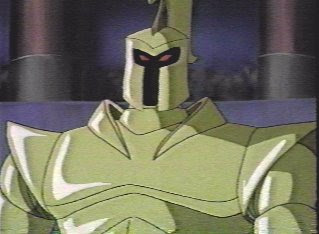 Gameblog reader jamused brought up the possiblility of "triple iron" being an heretofore unknown metal with treble the qualities of ordinary iron. I like that a lot. In the future I may have to describe some magic weapons or armor as being composed of triple iron. And Ian Sokoliwski suggested the perfect model for my idea of what a triple iron golem might look like: the Tri-Sentinel, an old once-off Marvel Comics menace created by an irate Loki and destroyed by Spider-Man while he was serving a stint as Captain Universe. Dig it: 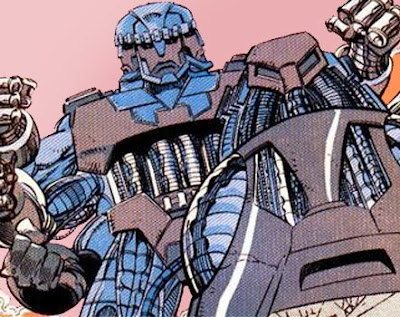 BAsed upon the MM entry for iron golems, here's Labyrinth Lord stats for a triple-faced, triple-armed, triple iron Talos:

In combat this unique construct normally strikes with three fists, but it can instead opt to stomp any single creature orge-sized or smaller. In addition to striking with three of its six arms, Talos may breather a cloud of poisonous gas 30' in diameter every other round. Anyone caught in the cloud of gas muct save versus poison or die. Only magic weapons of +3 or greater enchantment may harm Talos. The only magic effects that work on Talos are electrical. A lightning bolt has the effect of a slow spell for 1-3 rounds. Magical fire actually heals Talos. Being constructed of Triple Iron rather than ordinary iron Talos is immune to rusting effects.

Hephaestus constructed the orginal Talos. Loki magically merged three Sentinels to create his triple monstrosity. I think my Talos will be the product of those guys from the first Star Trek pilot, the Talosians. 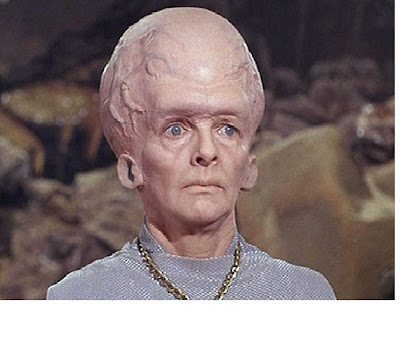