Right before their last move my sister-in-law and her hubby gave me some old metal miniatures. They played D&D and a few other games back in the day, but these days their gaming is largely of the German and MMORPG variety. Rob played in three campaigns of mine, but that was before the big move up north. Most of the figures are painted, but I'm going to attempt to paint the rest. In fact, I've decided that I'm going to paint these babies up before I buy any new metal figures. The idea is to get some practice before I go and ruin some nice Reaper figures with half-assed paint jobs. 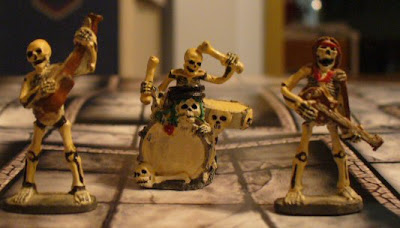 This skeleton band from Ral Partha was sold as "The Grateful Undead", if I recall correctly. I didn't paint this, I just thought it would be cool to share a pic. It's from a small line of comedic fantasy figures. As a kid think I owned two pieces from the line, the John Belushi Samurai and the three-headed 3 Stooges troll. 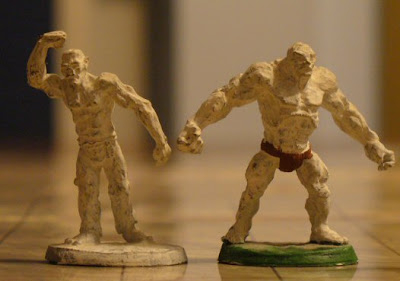 These golems are early nineties Ral. They were primed and the clay golem partially painted when I got 'em. The flesh golem has some stitchwork that's going to be a challenge to paint. It's so fine you can't see it in this shot. Part of me is tempted to try and modify these figures a little. I'd like to put weapons in the flesh golem's hands and maybe get him a backpack. That way he could be a Frankenstein adventurer for Encounter Critical. I kinda want to repaint the clay golem's diaper to be a bright purple. Then I could use some putty or something to give him some hair and paint the skin green. But those sorts of mods are a bit ambitious right now. I think instead I'll just paint up some golem dudes.

I'm pretty sure these little lizardish orcs were originally released by R-Kiiv a.k.a. Archive. What's the proper procedure for broken off weapons? 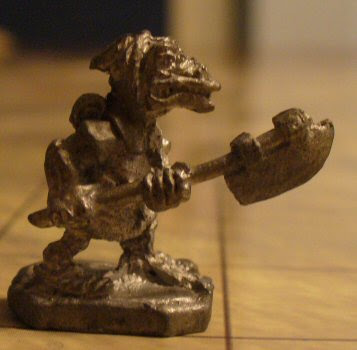 A close-up of one of the orcs. That polearm blade is substantial. 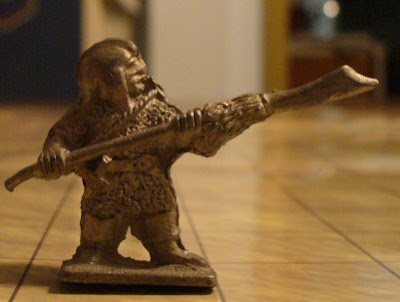 A different polearm wielding orc by another company. I think this wide-face tusk-mouthed fellow is an early Ral Partha. A lot of stuff needs to be trimmed from the mold lines before he can be painted. 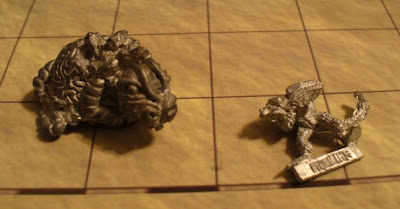 The lumpish thing on the left appears to be someone's idea of an Intellect Devourer. The body of the beast is brain-like, but someone either misunderstood the critter description or thought it could be improved, because a lizard head has been added by the sculptor. The other guy is a Games Workshop wizard's familiar. He's a furry little goblinoid carrying a sack. Very cool. 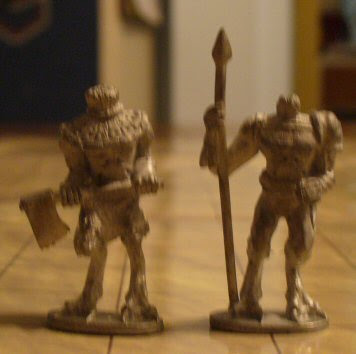 It's a shame this picture turned out so fuzzy. These guys are cool. They're Blemmyes or Blemmyae, a legendary race of beings with no heads and faces on their chest. I think they worship Arnim Zola. Skull & Bones, the d20 pirate book Gareth-Michael Skarka worked on, has stats for these dudes, but they don't quite fit these figures. These creatures are clearly Large size, but the Blemmyae from S&B are only medium. Still, that's a good place to start.