Remember the by-gone days of text adventure games? I played a little Zork as a kid, but was never really too much into it. I also had one where you looked for pirate treasure on a tropical island, but I can't remember the name. That one came as a cartridge that plugged into the back of my Commodore 16. It was about the only cool thing you could do with a Commodore 16. Later, the Hitchhiker's Guide to the Galaxy text game basically killed pretty much any interest I had in the genre. Damn lint.

Text adventuring may no longer have much commercial viability in this brave new era where half the videogame is a 3-D animated movie with no user interaction (I'm also playing through a J-RPG right now, can you tell?), but there's a loyal fan community still making these kinds of games. One member of that scene is S. John Ross, one of my favorite rpg designers and regular commenter here at the Gameblog. S. John has recently released Treasures of a Slaver's Kingdom, a crazy-awesome text adventure set in a corner of the Mighty Land of Vanth, the sample setting of Encounter Critical. In case you didn't know, Encounter Critical is the best pen-and-paper roleplaying game in the entire history of this or any other universe.

I started playing Treasures under the assumption that I would mess around with it a bit until I quickly remembered why I grew to dislike the format. But I'm having a blast. So far I've scored 308 out of a possible 500 points. I'm kinda stumped at the moment as to how to get the Cliff Giant to move his ass out of the way of the cave entrance he's blocking, but I haven't given up. Anyway, this post wasn't supposed to be about the whole game, just one amazing character: Gunwar.

Gunwar the dwarf is a peg-legged pirate and ex-Warrior. If even half his tall tales can be believed he's been everywhere and done everything. And he's got a great name, probably the best dwarf name since my bud Pat name his dude "Axebeard Beardaxe". Here's a brief sample of the kind of things Gunwar will talk about:

>parley with gunwar
"The real problem with all the SKY PIRANHA we've been getting lately is that they're so very good with machines."

>parley with gunwar
"... And then there was the time," says GUNWAR, "when I had to fight sixteen more of 'em in the CITY OF THUNDERS."

>parley with gunwar
GUNWAR grins. "I was never cut out fer piratin', you know, but I do so love the lingo! HAR!" The two of you exchange raucous HARS for a while.

>parley with gunwar
"... And she went on to demonstrate that she could SEDUCE anyone, regardless of species. It was the most interesting bet I ever lost, even if it cost me more than 800 GOLD CREDITS."

There is a sharp smell of ozone, and a faint electric sizzling in the air.

>parley with gunwar
You regale GUNWAR with the tale of your adventure in the SEA-MONSTER'S GULLET. He nods politely, pretending to believe you.

That "faint electric sizzling" is the vengeful Voltaic Wraith about to rudely interrupt our conversation. I attempted to USE Gunwar on the Wraith, since "Dwarf or Hobling" appears on the EC weapons charts, but it didn't work. Maybe I'll try to SEIZE him next time.

Either way, Gunwar the dwarf, I salute you. 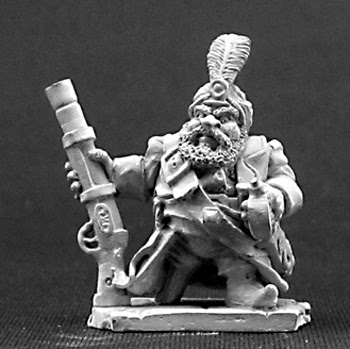 (Man, Reaper has a figure for damn near everything!)