'Tis a sad day at Castle Vyzor for two reasons.  First, neither Poor Brother Rupert nor Willy Whats-His-Name made it out of the Vaults alive.  Second, no one scored any treasure, and no one had the spare cash to carouse.  All anyone knows right now is that the party went in via the Verdant Vault, and the survivors exited via the Azure Tower, covered in blood and gore and apparently psychologically scarred for life. 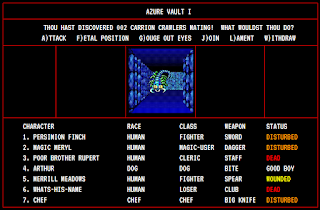