This week I'm going to try systematically developing a single concept over a series of posts, which I don't think I've done in a while.  (Or depending on how stringently you define 'systematic', I've never done it.)  More than once I've outlined in a post or two an idea for a campaign setting of some sort, but the World of Cinder is the only milieu I've really gone any useable distance with.  My Mutant Future setting developed organically, with very little forethought and the Ruins & Ronin island I was working on collapsed under the twim ambitions of working with too broad a sandbox and trying to come to grips with another culture.  The latter case is instructive and leads directly to the original inspirational material for this week's campaign proposal: The American Heritage Dictionary of Indo-European Roots.

Just so we're on the same page, I should take a moment to explain that English, the Germanic languages, Latin (and hence all the Romance languages), the Celtic languages, Ancient Greek, Sanskrit and many, many other tongues are generally held to all spring from a common linguistic source, a partially reconstructed language often called Proto-Indo-European.  The PIE language is only partially reconstructed because no native writing from the Proto-Indo-European era (say, 5,000-4,000 BC) has survived.  Probably they didn't possess the art of writing but maybe they just didn't record anything on a medium that could last 7 millenium.  Either way, the American Heritage Dictionary of Yadda, Yadda, Yadda identifies PIE roots held in common among multiple successor languages.  For a simple example, counting "one, two, three" in English and "une, deux, trois" in French both go back to something like "hoino, dwo, trei".

I first got this book back in the early nineties and every few years I dig it back up and read through it.  My wife caught me reading it a few weeks ago and mocked me on her Facebook page, but I eat this crap up.  I know it's uber-nerdy to read a dictionary from cover to cover, but I really dig soaking in the foundational elements that bind together Homer, Beowulf, the Viking sagas, the Vedas and everything that followed them.  And it's less than 200 pages long, so my oddball behavior isn't quite as obsessive as reading a normal dictionary front to back.  If I've lost you in all this amateur academic nonsense I should also point out that the Kurgan from Highlander was totally a Proto-Indo-European dude.  The Kurgan people were probably PIE speakers and noted for burying their dead under mounds, also called kurgans.  Whether they were really sadistic sword-swinging badasses is not attested in the record, as far as I can tell.
Anyhoo, one passage in the Dictionary always gets me thinking that one could use Proto-Indo-European to accomplish the same thing that Professor Tolkien does with Elvish.  Obviously it wouldn't be as polished as the worlds of Tolkien or M.A.R. Barker, but that won't stop me from absconding with their methods if I can.  Here's the passage, which I scanned rather than typed to preserve all the baroque diacritical marks: 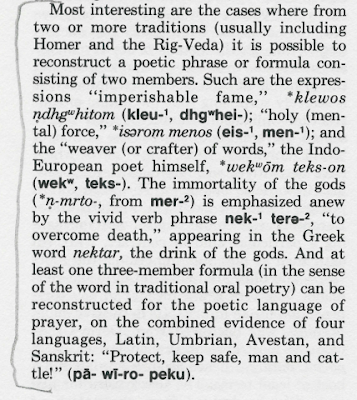 So based upon the above text, here's the elevator pitch for the Imperishable Fame campaign:   At the dawn of Western civilization it doesn't matter whether you live or die, it's how you die that is important.  Will you overcome death via the immortal poetry of the weavers of words, or will you survive as a holy force, a semi-divine boon to future generations?  Only the mightiest of heroes and the bravest of deeds can achieve Imperishable Fame.