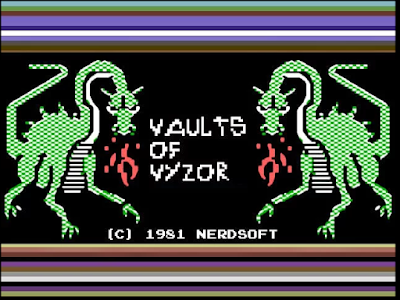 So after the most recent raid on the Vaults of Vyzor, the half-orc Sneakerly Trull (Zak S.) opts to carouse and is unable to hold his liquor, so he blabs about the whole thing.  The expedition began with TERMEX the robo-dwarf (Mike Davison), Dudlow the Halfling (Paul Schaefer), and four lame spear-carriers, the NPCS Biggens, Littlens, Ren, and Stimpy.

Sneakerly was actually late for the rendezvous to enter the dungeon.  TERMEX (Mike always put it in all caps.  If it's an acronym, I don't know what it stands for.  The Cyborg Name Decoder says it stands for Transforming Electronic Repair and Masterful Exploration Xenomorph.) and Dudlow opt to explore the first level below the Rosy Chambers, Castle Vyzor's den of debauchery.

The first room of level one is a guard post with 4 goblins and a bugbear on sentry duty.  Several of the NPCs fall in the battle.  It's one of those prolonged low-level slogs where no one hits anyone for several rounds in a row, much to the embarrassment of all concerned.  Eventually just one wounded goblin remains and runs for it.  The party opts to loot the corpses of the fallen foes rather than chase down the fleeing gobblin.  They find a bit of pocket change and not much else, except for the bugbear's coin pouch, which has "bad motherfucker" embroidered on it in Gobbocommon.  I don't know who ended up with that little trinket.

At this point Sneakerly Trull arrives and joins the party.  With three ways out of the first chamber, the party opts to check the door first rather than go down the distant corridors.  Sneakerly takes the lead, hoping that the locals will continue to treat him as a fellow monster rather than an intruder.  This pays off, as behind the first door is the guard barracks, where a sleepy bugbear in nightgown and cap reads Sneakerly the riot act for disturbing him.  Sneakerly claims to be delivering food and the bugbear shouts at him to try the orcs in the south and slams the door shut.

[When noise occurs--like combat--and there are monsters in an adjacent room, I often borrow a simple technique from MERP called the Activity Roll.  In MERP you roll percentile dice, the higher you get the more active are the nearby monsters.  No hard mechanics; it's just a guideline.  I usually roll a d6 for this in my own games, but I happened to have a d20 in my hand this time and rolled a "1," suggesting the lowest possible level of activity from the monsters.  My snap decision was that it was beddie-by time for the monsters and that the boss of the room was a grumpy sleeper.  The old timey sleepwear was added on the spot for comedic effect.]

Since the goblin also fled south, the party opts to head that direction.  They find a door on the wall of an extra-wide side corridor that ALSO leads to the barracks.  The Activity Roll is still low (a 4, IIRC), so they just earn another string of shouty profanity from Mr. Grumpy.  They eventually reach a fourway intersection further south and end up exploring a little bit in all three directions.  To the east they find the lair of the vicious silver shag carpet monsters, which they slay handily and turn into stylish cloaks.  The party declares themselves the Brotherhood of the Silver Cloaks.  [I'm using some old dungeon levels here and this room had three monsters found in an old game product I don't know.  All I have is some basic stats for 3 silver ______.  I'm not sure why I decided that they were hostile ambulatory carpet remnants.  We all agreed they must be related to cloakers and similar monsters.]

Later, they follow the trail of goblin blood to the south, where Sneakerly scouts ahead and finds him, but some brain-eating zombies found him first.  They opt to back away and go elsewhere.  The zombies later start slowly pursuing the party, but they get confused in a region with several side corridors and parallel passages.  As far as anyone knows, those dead guys are still shambling around the level, looking for brains to devour.

To the west of the four-way intersection is a series of twisty passages all alike.  They find some slopes down and up and a spot where some green stains turn out to be nearly dried-out almost dead green slime.  They torch the nearly-starved green slime.  Beyond that, they find a room where three Mad Max Fury Road warboy-looking guys feast on a fresh corpse.  The players immediately peg these guys as ghouls, but I refuse to acknowledge they're right even as they're making saves every time they get clawed. 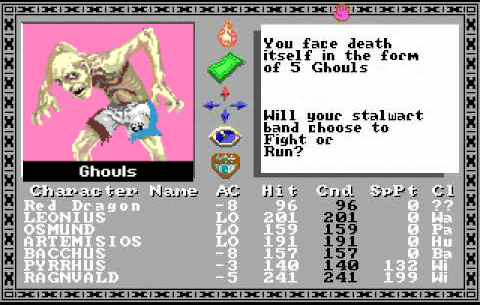 Three ghouls is a tough fight for nearly any low-level party, but some judicious maneuvering and ridiculous use of lard and caltrops allow the party to barely prevail.  Along the way, I roll two natural twenty claw attacks, one on TERMEX and one on Dudlow.  They both roll their own percentile dice to find their fate on the Arduin critical charts.  TERMEX ends up knocked out, with a concussion, and amnesiac.  Dudlow receives a major arterly slash on his leg.  He's bleeeding out fast.  They staunch the bleeding by applying fire to the wound, which very nearly burns him to death.  Sneakerly and Ren (the last hench-weenie) carry the dwarf and halfling out of the dungeon, where they recover from their wounds.

With 15 minutes left in the session, the party decides to go back to the dungeon.  The problem, though, is that no one can make their door open roll to get into the dungeon.  After each PC tries and fails, Paul rolls for Ren and succeeds while I'm rolling a d6 for the guards activity level and get a 6.  So Ren opens the door and catches a battle axe to the face.  Dead.  Oh, no, it's Mr. Grumpy!  And four goblins!  One of whom is all bandaged-up.  That one goblin barely survived the PCs' first visit and his run-in with the zombies.  What a champ.  While TERMEX fights Mr. Grumpy and Sneakerly bravely sneaks about, the goblins wrestle Dudlow to the ground so that the wounded guy can kick him in the ribs repeatedly.  The party eventually gets its groove back and murders the monsters just in time for the session to end.

They return to the Rosy Chambers.  Two expeditions has not resulted in much loot, but they've got a decent map of a good piece of the level and quite a few experience points for their troubles.  They know there are some orcs in the unmapped south and at least one wandering band of zombies. 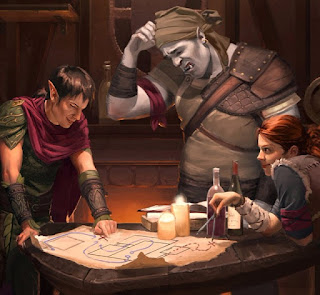 Sneakerly has some money from some other FLAILSNAIL adventure and blows it all on carousing.  Plus he owes the mob 20gp because he rolled higher than his cash on hand.  Joining the festivities in the Rosy Chambers, he emerges several days later.  He can't find his underwear.  Or his clothes.  Or anything else he owns.

A fun couple of hours.  Hopefully someone will find some decent treasure soon.


Ongoing Roll of the Dead