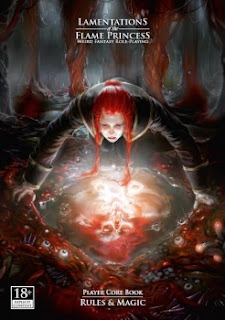 It's not exactly a state secret that, at its heart, James Raggi's Lamentations of the Flame Princess role-playing game is a revision and extrapolation of the 1981 Basic/Expert D&D rules, a.k.a. the Objectively Best Rules published by TSR.  And I'm confident that other people have probably gone through the 2 rulesets and done point-by-point comparisons already.  But I've decided to do the same thing myself, so I figured I would share my findings.  This will probably take a couple of posts.  So let's get to it.

LotFP uses the same 6 ability scores rated 3-18 as BX.  All ability modifiers use the -3 to +3 range as per Strength modifiers, i.e. no separate track for -2 to +2 for initiative adjustment or reaction rolls.

You begin generating a PC by rolling 3d6 in order, just as the Good Lord intended.  BX allowed for a 2 to 1 point swapping deal, where you could penalize your fighter 4 points of Intelligence to gain 2 points of Strength.  Instead, LotFP allows any two scores to be swapped.  I like that allot.  Less fiddly math without the pure anarchy of arranging the numbers as you please.

Here are some key differences in how the six stats work in play:

Charisma [This is the order they appear in LotFP.]
Constitution
Dexterity
Intelligence
Strength
Wisdom
Completely absent is the concept that high scores in your class's prime requisite should earn you an experience point bonus.  Good.  That was a vestige of OD&D back when high stats didn't actually do all that much for you.  Nowadays it's just double dipping.

I should note that, just like the earliest version of D&D, no real provision is made for scores above or below this normal human range, as the ethos of Raggi's game eschews imagining inhuman monsters or extra-planar beings as Just Like PCs But With Higher Numbers.

BX has an optional "hopeless character" rule where DMs were encouraged to allow a character with all below average scores or 2 or more scores of 3-6 to be thrown away in favor of a new set of rolls.  LotFP's version of this is to total the six ability modifiers.  If the number is below zero, trash the character and start over.  This rules is not listed as optional.

Another optional rules in BX concerns starting hit points.  If a new PC has only 1 or 2 hitpoints, the DM can allow a reroll.  LotFP comes with a non-optional minimum hit point chart.  If you roll lower than the minimum, you get the min instead.  The minimums are:

Note that Fighters get d8 for hit dice, so basically I Get All The Hit Points is a class ability for first level fighters.  Everyone else has to throw dice.

(Just kidding about the Objectively Best Rules comment.  Also, I'm confidant that James looked at other versions of D&D when he wrote LotFP.)