I honestly don't know how many times I've read the classic Judges Guild compilation Ready Ref Sheets.  If I recall correctly I bought my first copy (I own two) at a local convention back in the eighties.  Probably from the booth run by Castle Perilous of Carbondale, Illinois.  I've never been to their store, but for a very long time they were always my first stop at cons.  As Bubs likes to say, they got all types of crazy crap.
"All types of crazy crap" does a pretty good job of describing the contents of the Ready Ref Sheets, now that I think about it.  Imagine if you took the 1st edition DMG, removed everything but the charts and sprinkled it with extra pixie dust and nonsense.  That's Ready Ref Sheets.  It's so jam-packed with random dice charts, slim but potent rules and useful charts that I discover or rediscover something upon every reread.
This time I found a gem in the section on Women (pages 5 and 6).  This part of the book is infamous for the small chart that allows one to calculate the bust, waist and hip measurements of female characters based upon their Charisma and Constitution scores.  But that's not what is intriguing me today.  Instead, I want to look at this chart: 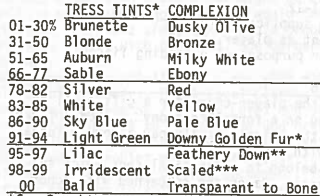 Following this chart, nearly a quarter of all women in the City State of the Invincible overlord have fantastic hair colors, except for the 1% of them that are bald.  Note that, as written, neither race nor age modify this chart.  Furthermore, although Auburn is listed as a hair color, Red Sonja style full on redheads don't appear here.

The other column is even more amazing.  1% of the women in the City State are Newhon Ghouls/Carcosan Bone Women.  The asterisks indicate that furred women also have cat tales (evidence of cat girls in a D&D manual circa 1978!), feathery women have wings (are they functional or vestigial? the note doesn't say), and scaly women are "half mermaid."  Would that be one quarter fish, three-quarters woman?  If this chart is to be believed, the demographics of the Wilderlands is pretty wild before you even take monsters and demihumans into account.

The situation with Tress Tints gets even more interesting when you look at the modifiers.  One kind of woman you can encounter in the City State (via the gorgeous chart filling most of page 2) is "Daughter."  Few details are given, but the intent is clearly for the PCs to try to make some time with one of these gals and get in trouble with dad.  Daughter's are listed as taking a -30% penalty on the Tress Tints roll.  That means a Daughter can only have Sable, Auburn, Blonde or Brunette hair, with Brunette being the most like color by a large margin.  My read of this is that all the other listed colors are dye jobs.  The fathers of these Daughters won't allow them to wear their hair silver or lilac, so they all end up going out with their natural hair color.

Since Houris (i.e. prostitute) roll a +30% on this chart, I think the intention was that only women of dubious reputation or daring fashionistas dye their hair in the City State.  But here's the weirdest part: because a 00 is a result of Bald, any Tress Tint roll for a Houri of 70 or more will result in a bald sex worker.

What the heck is going on in the City State that 3 out of ten prostitutes shaves their head?  Is this some kink that's popular with the local johns?  Is shaving your head part of the initiation ceremony to join the Courtesan Guild, which according to the random guild chart on page 3, is a real thing?  I don't know what the deal here is, but if your City State campaign does not include bald harlots then you are clearly doing it wrong.