So I'm still obsessing over Oriental Adventures today. I've even come up with this little semi-historical campaign concept working through my brain. But tonight I wanted to compare what is required stat-wise to qualify for the various Asian and European classes. Here's a chart comparing the two: 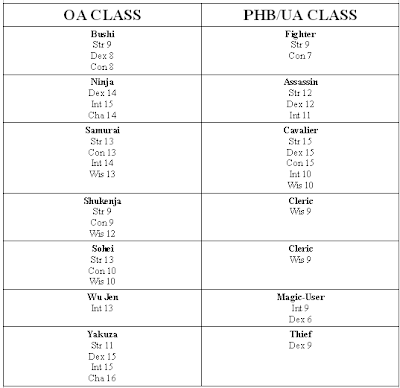 I've omitted the Kensai because there's no comparable baseline AD&D character class. Also not appearing on the chart are the Barbarian and the Monk, as their requirements are exactly the same, despite the differences between the Eastern and Western versions of those classes.

Looking at the classes on the chart, you can see that in most cases it is noticeably harder to qualify for an Oriental Adventures class than for the corresponding Player Handbook/Unearthed Arcana class. The Samurai/Cavalier pairing is a possible exception here. I don't know for sure that 15/15/15/10/10 is harder to qualify for than 13/13/14/13. The math would be a pain because both UA and OA assume your going to use one of the various 'cheater' methods to generate stats. But my best guess is that Cavalierdom is the harder club to join, stat-wise.

If you assume that the stat rules inform the game world, here are a few conclusions you can draw from this chart. For one thing pretty much all character classes are rarer in the Mythical Orient than their Fantasy Europe equivalent, with the possible exception of the Samurai. That suggests most warriors, gangsters, priests, etc. will use the Normal Man rules. For instance, many of the less talented warriors in a Samurai clan will have all the equipment and attitude of the samurai, but in combat they won't amount to much more than one hit die goobers.

Another interesting thing to be learned here is the difference between Eastern and Western organized crime. The assassin needs brute Strength, while the ninja focuses more on influence via Charisma. Similarly what the Yakuza acquires through social engineering the Thief simply sneaks in and takes.